You can install Overhave via pip from PyPI:

The web-interface is a basic tool for BDD features management. It consists of:

Overhave features could be created and/or edited through special script panel in feature edit mode. Feature should have type registered by the application, unique name, specified tasks list with the traditional format `PRJ-NUMBER` and scenario text.

Script panel has pytest-bdd steps table on the right side of interface. These steps should be defined in appropriate fixture modules and registered at the application on start-up to be displayed.

Overhave generates Allure report after tests execution in web-interface. If you execute tests manually through PyTest, these results are could be converted into the Allure report also with the Allure CLI tool. This report contains scenarios descriptions as they are described in features.

Overhave has special demo-mode (in development), which could be possibly used for framework demonstration and manual debugging / testing. The framework provides a CLI entrypoints for easy server run in debug mode:

Note: you could run admin in special mode, which does not require consumers. This mode uses threadpool for running testing and publication tasks asynchronously:

But this threadpool mode is unscalable in kubernetes paradigm. So, it’s highly recommended to use corresponding consumers exactly.

Overhave has a CLI that provides a simple way to start service web-interface, run consumer and execute basic database operations. Examples are below:

Note: service start-up takes a set of settings, so you can set them through virtual environment with prefix `OVERHAVE_`, for example `OVERHAVE_DB_URL`. If you want to configure settings in more explicit way through context injection, please see next part of docs.

Service could be configured via application context injection with prepared instance of OverhaveContext object. This context could be set using `set_context` function of initialized `ProxyFactory` instance.

For example, `my_custom_context` prepared. So, application start-up could be realised with follow code:

Overhave has it’s own built-in PyTest plugin, which is used to enable and configure injection of prepared context into application core instance. The plugin provides one option:

The PyTest usage should be similar to:

Overhave has producer-consumer architecture, based on Redis streams, and supported 3 consumer’s types:

Note: the `overhave_test_execution_factory` has ability for context injection and could be enriched with the custom context as the `overhave_admin_factory`. 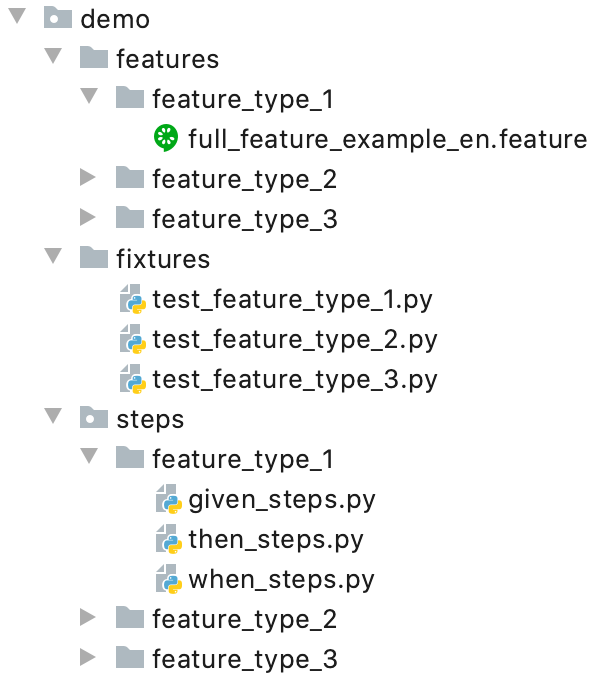 The right approach is to create a root directory (like “demo” inside the current repository) that contains features, fixtures and steps directories.

The Features directory contains different feature types as separate directories, each of them corresponds to predefined pytest-bdd set of steps.

The Fixtures directory contains typical PyTest modules splitted by different feature types. These modules are used for pytest-bdd isolated test runs. It is necessary because of special mechanism of pytest-bdd steps collection.

So, it is possible to create your own horizontal structure of different product directions with unique steps and PyTest fixtures.

Note: this structure is used in Overhave application. The formed data gives a possibility to specify registered feature type in the web-interface script panel. Also, this structure defines which steps will be displayed in the right side of script panel.

Overhave has it’s own special feature’s text format, which inherits Gherkin from pytest-bdd with small updates:

An example of filled feature content is located in feature_example.rst.

The web-interface language is ENG by default and could not be switched (if it’s necessary - please, create a `feature request` or contribute yourself).

The feature text as well as pytest-bdd BDD keywords are configurable with Overhave extra models, for example RUS keywords are already defined in framework and available for usage:

Note: you could create your own prefix-value mapping for your language:

Overhave gives an ability to sent your new features or changes to remote git repository, which is hosted by Bitbucket or GitLab. Integration with bitbucket is native, while integration with GitLab uses python-gitlab library.

You are able to set necessary settings for your project:

The pull-request (for Bitbucket) or merge-request (for GitLab) created when you click the button Create pull request on test run result’s page. This button is available only for success test run’s result.

Note: one of the most popular cases of GitLab API authentication is the OAUTH2 schema with service account. In according to this schema, you should have OAUTH2 token, which is might have a short life-time and could not be specified through environment. For this situation, Overhave has special TokenizerClient with it’s own TokenizerClientSettings - this simple client could take the token from a remote custom GitLab tokenizer service.

Overhave gives an ability to synchronize your current git repository’s state with database. It means that your features, which are located on the database, could be updated - and the source of updates is your repository.

For example: you had to do bulk data replacement in git repository, and now you want to deliver changes to remote database. This not so easy matter could be solved with Overhave special tooling:

You are able to set necessary settings for your project:

You are able to test this tool with Overhave demo mode. By default, 3 features are created in demo database. Just try to change them or create new features and run synchronization command - you will get the result.

Overhave gives an ability to set custom index.html file for rendering. Path to file could be set through environment as well as set with context:

Appropriate strategy and additional data should be placed into `OverhaveAuthorizationSettings`, for example LDAP strategy could be configured like this:

Overhave implements functionality for s3 cloud interactions, such as bucket creation and deletion, files uploading, downloading and deletion. The framework provides an ability to store reports and other files in the remote s3 cloud storage. You could enrich your environment with following settings:

Project installation is very easy and takes just few prepared commands (make pre-init works only for Ubuntu; so you can install same packages for your OS manually):

Packages management is provided by Poetry.

Tests can be run with Tox. Docker-compose is used for other services preparation and serving, such as database. Simple tests and linters execution:

Project documentation could be built via Sphinx and simple make command:

By default, the documentation will be built using html builder into _build directory.

Distributed under the terms of the GNU GPLv2 license.

If you encounter any problems, please report them here in section Issues with a detailed description.